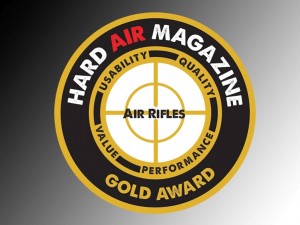 Quality, Usability, Value and Performance. These are the key decision points for anyone buying an air rifle.

Now, for the first time, these factors are all taken into account in HAM Awards – a rating system that allows airgun buyers to make real “like for like” comparisons between different air rifles.

Hard Air Magazine (HAM) http://hardairmagazine.com specializes in detailed test reviews of airguns and related products. As HAM reviews are conducted according to standardized test protocols, HAM test review scores can be directly compared to each other.

Few air rifles achieved the coveted HAM Gold Award Status. Among them is the Weihrauch HW97K.

Hard Air Magazine Publisher, Stephen Archer commented. “The HW97K tested by HAM demonstrated great accuracy and consistency. The trigger is excellent and the gun exudes a feeling of quality. There’s no flashy bells and whistles with the HW97K, what you get is solid – if understated – value. This air rifle excels in all the areas demanded by knowledgeable airgun shooters.”

“The fixed barrel and underlever cocking system appeal to many springer shooters, with their promise of accuracy.” Continued Archer.  “Here again, the HW97K certainly delivers!”

The full review is here:
http://hardairmagazine.com/reviews/airgun-test-reviews/weihrauch-hw97k-air-rifle-177-cal-test-review/

Unlike almost every other online airgun source in the USA, Hard Air Magazine is independent of control or influence by any manufacturer, distributor or importer. This means that HAM test reviews and HAM Awards are truly independent and give airgun buyers real confidence in their purchase decisions.